Will Florida Accept My Handwritten Will? 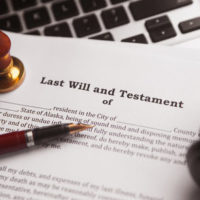 There is a famous story in Canadian estate planning law about a farmer who died in 1948 after getting pinned underneath his own tractor. The day after the farmer died, neighbors noticed some writing on the side of the tractor. It turned out the dying farmer used his pocket knife to scratch out a one-sentence will: “In case I die in this mess I leave all to the wife.” A Canadian court later accepted this will as valid.

Although the “tractor will” was an aberration, many people continue to write their own wills without observing the necessary legal formalities. A will made out entirely in the testator’s own handwriting is known in legal terms as a “holographic” will. And while some states and counties accept such wills as valid–the tractor will was essentially treated as a holographic will–Florida does not.

All Florida Wills Must Be Witnessed

To be more precise, Florida will not recognize a holographic will that is not properly witnessed. Under Florida law, all wills “must be in writing” and signed “in the presence of at least two attesting witnesses.” This means that regardless of whether a will is typed or handwritten, it is not valid unless the testator signs the final document before at least two witnesses, who must also sign the will in the presence of one another.

Oral and Video Wills Are Also a Non-Starter in Florida

Similar to its policy on holographic wills, Florida also refuses to recognize any “nuncupative” will. Nuncupative is a fancy way of saying “oral” will. In other words, you cannot simply tell someone your estate planning wishes on your deathbed and expect a Florida court to treat that as a valid will. (Historically, nuncupative wills were used by sailors and soldiers mortally wounded in combat.) Again, many states do recognize nuncupative wills, but not Florida.

It’s also worth noting that the ban on nuncupative wills also encompass any kind of “video will.” So don’t think you can just record your last will and testament orally and upload it to YouTube. That still does not comply with the requirements of Florida law.

Ultimately, Florida has good reason to require wills be in writing and properly witnessed–to ensure the document presented to the court after the testator’s death is an accurate expression of the testator’s intentions. After all, you cannot validate your own will after you die. So it is in your best interest to work with a Fort Myers estate planning attorney who can assist you in drafting and executing a proper will. Call the Kuhn Law Firm, P.A., at 239-333-4529 today if you would like to speak with a member of our legal team today.