Can I Use a “No-Contest” Clause in My Florida Will or Trust? 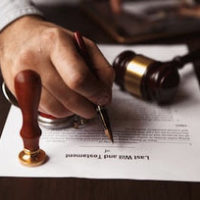 One of the biggest reasons people make an estate plan is to minimize the potential for litigation among family members. You have no doubt seen stories in the news about heirs fighting for years in court over a loved one’s estate. In some of these cases they are not even fighting over a particularly large estate–but as you know, family disputes are often more about emotion stakes than the money.

You also might have heard of something called a “no-contest” clause. This is basically a penalty you put in your will or trust to discourage an heir from filing a lawsuit challenging the document. For example, say you have two children. You make a will leaving them each $15,000 from your estate. But you also enclose a no-contest clause that says if either child contests your will in court after your death, they lose their inheritance. After you die, one of your children ignores the no-contest clause and contests your will. The no-contest clause would then “disinherit” the child, leaving him with nothing.

Based on this description, maybe you think a no-contest clause is a great idea. After all, who would try to contest your will if the cost was losing their entire inheritance? Unfortunately, if you are a Florida resident, this is not an option. Florida is just one of two states–the other is Indiana–where state law prohibits courts from enforcing no-contest clauses.

This ban also applies to trusts. So if you include a no-contest clause in either a will or trust, a Florida judge will simply ignore it. This won’t invalidate the entire document, just the no-contest clause.

Keep in mind, just because Florida does not allow no-contest clauses, you can still impose other conditions in your will or trust. Let’s say you have a daughter who is not terribly responsible with money. You don’t want to leave her a large sum of money in your will. So instead you create a trust for her benefit and state she can only take a certain amount of money out of the trust each year. Or perhaps you simply leave the money to a trustee who can decide where and when to spend the money for the benefit of your daughter. (This is known in legal terms as a “spendthrift” trust.)

Indeed, if you are worried about the possibility of a family member contesting your will, it may be in your best interest to create a trust. A trust is more private than a will–it does not have to be filed with the court–and it is often less susceptible to contests. Of course, you should not create something as complex as a trust without first speaking to a qualified Fort Myers estate planning lawyer. Contact the Kuhn Law Firm, P.A., at 239-333-4529, if you would like to speak with someone today about creating your Florida will or trust.